The oldest traditional Highland Games in Scotland; home of the Clan Grant Gathering

One of the longest established traditional Highland Games in Scotland, Abernethy Games were first held in 1880. Here is a poster from the Games in 1910, when they ere being held on a field at Coulnakyle.

Following a break between the two wars, they have been held every year on the present Games Field in the village since 1946.

The events and competitions remain much the same from year to year, but every year is different as new competitors come on to the scene and new records are set. Uniquely, Highland Games combine tests of strength, skill and endurance, with the traditional Highland art forms of music and dance. Massed Pipes and Drums, usually the combined forces of 6 or 7 bands from the local area, add a sound and spectacle that makes for a very special experience and one that is rooted deeply in the culture of the Highlands.

The Abernethy Games are run by the community of Nethybridge, a village of 700 or so, set at the foot of the Cairngorms and at the edge of Abernethy Forest, one of the largest surviving remnants of the great Caledonian Forest- and the setting for the Game’s RSPB 10 mile Road Race.

The Games are managed by the Abernethy Highland Games Association which is run entirely by volunteers living in the local community. Any surplus funds after meeting each year’s costs are used solely for the improvement of the Games. The Games receive no subsidy and to continue every year depend on the takings from admissions and rentals on Games day, and on the support in kind of many local individuals and businesses. They are a true community enterprise. 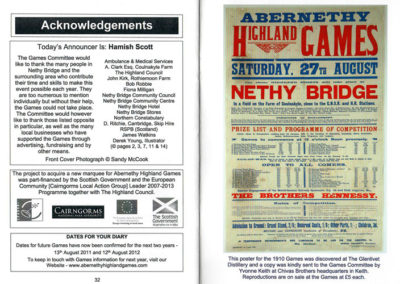 Poster from 1910 and Newsletter The Nethy