In 1843 following much conflict about a third of the members of the national Church of Scotland broke away to form the Free Church.  In Abernethy the minister and the majority of the congregation remained in the Church of Scotland but six elders and some others ‘came out’.

At first there was no church but in 1850 the earl of Seafield gave land near Old Bridgend and the church (now known as the Dell Road Church) was built. The manse followed soon after.

This happened peacefully in Abernethy as the minister and congregation agreed to go into the union and there was little or no move to form a separate Free Church congregation.

In addition to the church itself the heritors had to provide a manse with ‘suitable offices [outhouses for domestic and agricultural use] and garden and either a glebe of not less than 4 acres or enough grass to graze one horse and two cows’.

The earliest notice of a manse at Abernethy comes in 1624 when the minister, Patrick Grant, assured the Synod of Moray that ‘he now hes his residence in the parochin of Abernethie and sall abyd thair and build ane manse besyd his glei’. A year later he was still promising ‘shortly to dwell in the manse of the said Kirk’.

This was evidently built at least partly of turf as a successor was granted permission to cast turf near the Spey at Balliemore to ‘uphold and repair the principal house of the building wher I reside’.

Something rather better was provided for William Grant, minister in 1736, when the Duchess of Gordon told her chamberlain to provide money for building ‘ane mansion house’ for him. This house seems to have remained the basis for the manse for a long time as a report in 1852 said that the manse had been built at various periods.

A plan dated 1773 shows the manse as an E shape with the central shaft reversed into a short projection at the back. Changes were made for Duncan Robertson in 1907 but when the union of 1929 took place the former Free Church manse was chosen and the old manse sold to the last minister Rev Archibald Ross. Much addition has followed and the manse is now the Abernethy Outdoor Centre.

The glebe was the area of land on which the minister could grow crops and graze his horse and cows. John Grant, writing in 1793, pleaded that one horse was not enough for ploughing, leading in his peats, bringing home his meal from the miller and for use by the minister for travel within and beyond the parish.

Until 1866 the minister or his ‘man’ worked the glebe themselves but an act of that year allowed him, with the consent of the heritors and Presybtery, to let the glebe to add to his income.

In Dr Forsyth’s time part of the glebe was given to the golf course but in 1929 when sold the glebe apparently still measured 23 1/2 acres. 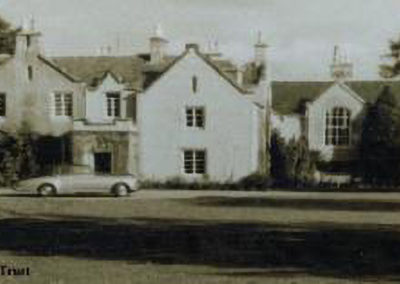 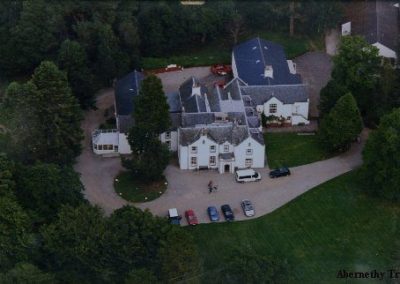 Aerial photo of the Old Manse