Opposite the House of Abernethy ( Abernethy Trust)

An act of the Scottish Parliament in 1696 ordered that there should be a school in every parish, the heritors (local landowners) providing a commodious house and a salary for the master, who should be appointed jointly by the heritors, the minister and the Presbytery

1709 – The Society in Scotland for Propagating Christian Knowledge (SSPCK) was set up to fund extra schoolteachers (and so called ‘charity schools’). Up until now, large highland parishes had only one school serving them – a completely inadequate arrangement.

This new arrangement provided ‘ambulatory’ schools – the teacher was accommodated by the locals of a particular community and then, after a few years, moved to another location in the parish. This was in order to spread the benefits of education as widely as possible. The teachers were appointed centrally on local recommendation and the schools, often called charity schools, were supervised by the Kirk Session.

The SSPCK schools were ‘ambulatory’ with no set schoolhouse- the master being located in a small house, or part of a larger one, for a few years before being moved to another area so as to spread the advantages of education as widely as possible The Presbytery of Abernethy petitioned Parliament to allow them to spend unused funds on the ‘the erection and maintenance of schools’. The spare money stemmed from the absence of church ministers in post at the time. The petition was signed by James Grant of Freuchie, among others.  Ambulatory rural schools were usually sited in the church yard.

1711 The earliest recorded schoolmaster of Abernethy in 1711 was Lachlan Shaw, (SSPCK ambulatory schoolmaster) a native of Rothiemurchus who later became minister at Kincardine, Cawdor and Elgin, and whilst at Elgin wrote The History of Moray.

The first such school in Abernethy parish was set up at Kincardine in 1722 when the master, Thomas Donaldson, was sent a parcel of books including 20 Bibles, 7 dozen Catechisms, 4 Arithmetic books, 2 English grammars and 8 quires of writing paper. From then on there were occasional charity schools in the parish including more than one in the Braes. There were even some private enterprise tutors paid for by parents for a few years in a particular area

1729-1733 Gregor Nicholson Transferred from Inverallan in response to request for a teacher from ‘several husbandmen in the braes of the parish of Abernethy’.

In 1750 a new school was evidently needed as a small sum was voted by the Kirk Session for it and in response to a misdemeanour, the Kirk Session ordered a local man to ‘cut and lead all the timber necessary for the schoolhouse and to bind and set up the couples [timbers] at his own expense.  The schoolhouse may have been at first in the churchyard as was usual in rural parishes, but the present site has been used for centuries.

It is likely that a somewhat cramped stone building was built – its ground floor being the school and the upper floor being accommodation for the master and family.

In 1821 the Presbytery recommended that the schoolmaster should open a Sabbath school also and it was not until 1856 that the hard worked dominie was granted a whole free day on Saturday.

By 1837 the building, reported to be over 20 years old, was made of stone and lime and slated but had insufficient accommodation – the schoolroom being on the ground floor with the master’s family living above. Highland parishes were so large that one parish school was totally inadequate

A detailed report in 1837 by the minister Donald Martin shows that the schoolmaster William Macdonald had been more than 30 years in the post, and that he taught Reading, Writing, Arithmetic, Book-keeping, Latin, Mathematics and the Precepts of Religion, and by 1841 also Geography.

The pupils (or their parents) paid a quarterly fee for each subject – for example English 2 shillings, with Writing 2/6, with Arithmetic 3s, Maths 5-10s and Latin 5s. Mr Macdonald was qualified to teach higher studies but said that he was never asked to do so.

School roll varied between 114 girls and 73 boys, aged between 5 and 20. It was likely that attendance was very irregular as children were often needed to work at home.
School day Winter 9am – 3pm / 10am – 4pm, with one hour break.
Summer 7am – 5pm, with 2 breaks.
School holidays One day at Christmas, one day at New Year and the month of September ( for harvest work )
1867 – at this time there was a Free Church School and several ‘private tutors’ who were paid for by local parents. Report requested two parish schools – one to cover Tulloch and Boat of Garten and another to cover the Braes of Abernethy, upper Clachaig and upper Aultmore with at least 30 children on each roll, one teacher and often very poor accommodation.

1870s Subsequent to Lord Young’s Education Act, Abernethy school replaced the parish school. Responsibility for provision of schools transferred from church to state. Improved by the addition of a class room and appointment of a female teacher. New house also provided for the school master.

These schools were to disappear after the passing of the Education Act of 1872. This took the provision of education away from the church and gave it to the state – at various times represented by Inverness County Council and Highland Region, through local School Boards. Education was now free for all and the age for finishing compulsory school was gradually raised.

An extra teacher was employed and accommodation was increased. However, numbers of children in the catchment area later reduced, leading to reductions in grants and staffing.

Additional building has been done at various times to deal with larger pupil numbers but in the early 1970s the school ceased to provide secondary education (in favour of Grantown) and the extra space was used by the county/region as a base for short courses of outdoor education for visiting pupils.

Kenneth Steele, John Mathieson,  and John MacLeaod who went on to become Depute Director of Education for Inverness-shire,

from the late 1960’s James Stewart and Ewan Ross

From top to bottom on right hand side :

John Scott MA – headmaster from 1920 until he retired in 1935 with his wife Jeannie, possibly outside the schoolhouse.   My grandfather John Scott used to make paths by himself during the summer school holidays.   According to two of his former pupils he had a nickname “The Navvy”  as he was seen around with his wheelbarrow, pick, shovel and hardcore.(Photograph from  Mary Scott, granddaughter).

3.  Mr Scott with his teachers

Mr Scott with all his teachers (Photograph from Mary Scott, granddaughter).

Note the bulges in the boys jackets – lunch!  The only person known in the picture is Andrew Gordon, 2nd from right, back row.   He was born 1844, he went to the States, and his grandson was a musician 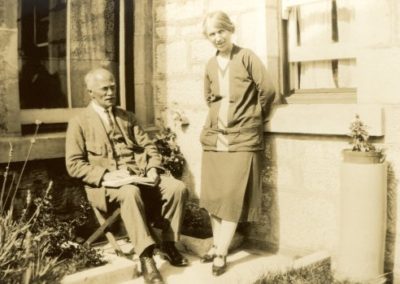 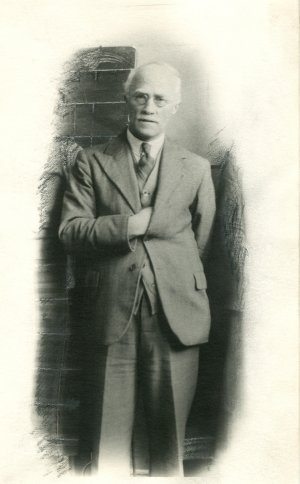 Mr Scott with his teachers 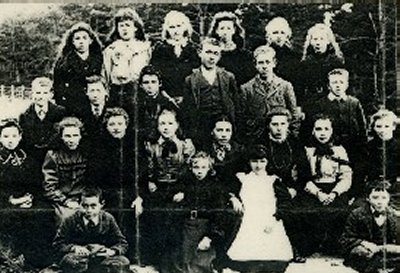 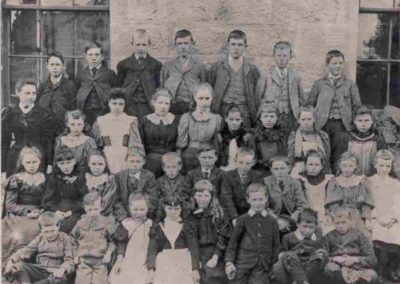