Aultmore House was built between 1911 and 1914. It was commissioned by Archibald Mirrielees whose father, an Aberdonian, and his partner, Mr Muir had made their fortune in Russia. Initially they were involved in import /export but later founded the Moscow department store M&M’s which is still to be found.

Archibald Mirriliees spent his working life in the family business in Russia. He commissioned the noted English architect, Quennell, to design Aultmore to be his family’s summer residence. Sadly Mr Mirrilees spent only one summer at Aultmore and died the following year.

Since this coincided with the First World War his widow found it difficult to sell until about 1922 when the property was bought by the Nivison family.

The house was extended to give additional ancillary accommodation, bedrooms for the children and accommodation for their nurses. The first and second floors of the extension are still referred to as ‘The Nursery Wing’ and ‘The Nursery Flat’. Aultmore remained in the ownership of the Nivison family for about 50 years. Initially it continued to be used as a summer residence and for shooting parties. On the death of her father (Lord Glendyne) his daughter became the main resident. Her brother opted for a yet larger property which the family owned in the south of England.

During the Second World War Aultmore became a convalescent home for the Forces and the gardeners’ cottages were used for evacuees.

Aultmore passed out of the Nivison family in the Seventies and became a finishing school for foreign girls. In the Nineties it operated as a bed and breakfast establishment.

Sadly by the end of the Nineties Aultmore was uninhabited and falling into a state of disrepair.

In the early summer of 2000 Aultmore was advertised for sale. Bought by Brian and Irene Taylor and, after renovation, opened for Bed & Breakfast and Self-catering holidays, conferences. 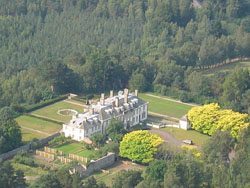 Aultmore from the air