A Rough History of Birchfield;  Birchfield was a mostly unpopulated district of Nethy Bridge sandwiched between the River Nethy in the north and the Duack burn to the south before the stone house was built in its south west corner.

Dwellings were to the west towards the then Rothymoon district. The Buildings A former farmhouse with adjacent outbuildings converted into holiday cottages. It is rumoured to be one of three similar dwellings build for a cadet line of the Grant family between 1775 and 1800.

The Georgian facade is very similar to the Dell of Abernethy (cf) which also shares similarities in the reception rooms and banisters. The plaster cornice in the sitting room feature fleur de lilys and it may be that French plasterers employed for the Adam restoration on Castle Grant were responsible.

The style of the dining room ceiling is similar to that found in the castle. It is probable that the dormer windows at the front top are Edwardian alterations. The flat roofed porch is later and has been substituted for a former pitched roof porch.

Birch Beag  was connected to the main house by a single storey room in the 1970 but the rear one storey connecting corridor with bathroom over may have been earlier. Birch Beag had access up steps in its western end and the first floor was used as a sewing room after the installation of its dormer window. It was converted into a holiday cottage by the Rankins in the 1980.

Birch Mhor  was made into a separate cottage at the same time. Birch Croit  was a room and its undercroft a dairy. It has a separate septic tank. Services Mains water seems to have been present for as much as 100 years. A depression in front of Birch Beag seems indicative of the position of a well.

After the war batteries were recharged from a generator powered by the Duack Burn, at the end of the lower garden but its water has too much iron in it to be potable. Water meters for the cottages were installed in 2008.

Overhead electricity by wayleave was attached to the building in 1960 but put underground in 2008. Drainage is to a septic tanks.

Planning The buildings were listed (Grade B) by Highland Regional Council as being of special architectural or historic interest on 23rd June 1980 being thought to date from about 1800 and compared with The Dell in Nethy Bridge  On 16th June 1981 the  Council gave permission for an extra window to be inserted in the main bedroom of the house and for the middle of three south-facing windows of the long cottage (Birch Mhor) to be converted to a door.

On 18th April 1983 approval was given for the long kitchen and scullery to be converted to two separate cottages. (The single free-standing cottage had been referred to by F.W. Grant up to 1960 as cabin de vault (later cottage 3 and then Birch Croit) and the longer cottage as cabin de luxe later cottages 1 and 2 and then Birch Beag and Birch Mhor.)

On 21st March 2000 the Highland Council approved the creation of a second dormer window to the larger of the southern cottages (Birch Mhor) and a change to the second bathroom window to the main house. The resiting of the two excavated roof lights in the cottages to the garage was not acted upon.

Final approval for the erection of a polytunnel was granted on 25th March 2004.

Tenancies The elaborate wall plaque inside the Old Kirk on the Grantown Road commerates the death of Capt. John Grant who died, aged 77, on 25th January 1848 at Birchfield.

1n 1908 Alex Mackenzie, the hotel keeper, was tenant. Mary Grant of West Cullachie has kindly told us from her family history that Francis William Grant, who was born in 1839, accumulated tenancies of Tombae (now a ruin), Rothiemoom and Birchfield. He had married Margaret Allan (born 8th October 1844) and he died at Birchfield on 6th April 1924 and his wife also died at Birchfield on 19th October 1932. His son, also Francis William Grant, (born 1878) succeeded his mother as tenant and although he married on 21st November 1932 had no issue when he died on 23rd September 1962.

At that time Birchfield was tenanted as just over 2 acres, possibly with grazing arrangements in nearby fields. His brother Robert (born 31st October 1908 died 16th June 1972) took in the farms at Tomdhu and East and West Cullachie and the land s became separated by direct ownership. References in Dr. William Forsyth book In the Shadow of the Cairngorms

The roll of the West Abernethy Armed Association Company on 17th September 1798 reveals a Captain James Grant residing at Birchfield as did Corporal Donald Stewart and Privates James Taylor and Andrew Macpherson.

The demolished hovels between Birchfield and Rothiemoon are reputed to have been occupied by at least one Stewart family. The Rev. Martin of Abernethy 1820-1838 succeeded in bringing on William Forsyth to become an elder. Mr. Forsyth was noted for his physical strength and having lifted a 20 stone Mrs. Grant of Birchfield (who sat in the front seat of the west gallery of the Old Kirk) carried her out after she had fainted. Presumably that was the same Mrs. Grant of Birchfield who appears to have led a walkout from the church in protest against the same Rev. Martin who called a miscreant to the culty stool.

The last recorded instance of public rebuke in the church. Soon after the second world war someone was collecting ground rents from gullible neighbours claiming that Birchfield had a superior feu from the Estate.

From the mid-1950 until shortly before her death in 1998 Jessie Smith nee Calder looked after Birchfield every week with the occupants gently but firmly appraised of the extent of her duties.

The latter revision reveals the present route of the defunct railway line with bridges over it providing then new access to Birchfield and Tombae. The trains would whistle as they emerged from the cutting behind the vegetable garden so that the stationmaster could open the gates at the level crossing to let the train cross the road. One morning he did not but the train crossed anyway, disturbing the closed gates. Now covered cobbles indicate a road or yard coming from behind Malvern toward the house and barn and swinging round the edge of the knoll in the garden towards Rothiemoon and thence through a ford over the River Nethy to Coulnakyle.

The surrounding fields had been known as Birchfield Farm lands up to at least 1960. The land comprising the village sports field was originally Birchfield

The croft land between the B892 and the old railway line north of the Duack Burn was known by the Macdonald family as Birchfield also, up to the time of housing being built in about 2004, and the name Birchfield was lent to Birchfield Court in 2010.

Eleven and a half acres of fields abutting the house were leased from the estate which were made into a cross country horse course by Mrs. Pat Taylor in the 1990, but taken back by the estate as part of Rothiemoon Farm before 2000. The gardens have been developed informally since that time with a view to encouraging wildlife and green tourism awards were obtained for the holiday cottage business from 1999. 1.01.2010 Tim & Janet Collins 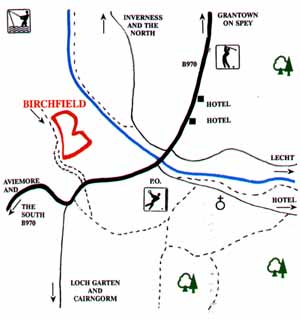 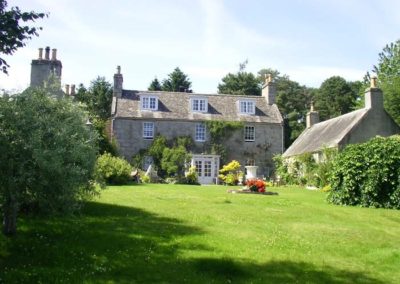