Family lived in the present house ‘Duack Mills’ (under renovation in 2004-5). Originally, this timber building was to be replaced by a stone building, but due to illness Mr. MacDonald didn’t achieve this. The house had its own well next door, as did many of the nearby houses – being named ‘Sawmill Cottage1’, ‘2’, etc.

The current building ‘Redwood’ was the stable for the three / four Clydesdale horses used to pull the timber from the forest. Sawmiller and builder of the Duack Lade and dam, serving the sawmill.

Mr. MacDonald died 1882 of pneumonia. 11 children – youngest child was the father of Mr. Bill MacDonald (owner ‘Redwood’ 1994). One daughter married a Fraser and their son became Lord Provost of Aberdeen.

he current building ‘Redwood’ was the stable for the three / four Clydesdale horses used to pull the timber from the forest. After the sawmill had stopped operating, the Newfoundland (‘Newfie’) foresters working locally during World War 2 expressed an interest in it, but this was not followed up. The harvested timber was instead either shipped out by train or went to the local Canadian timber mill.

19th Century, presumably, much money and expertise was required in order to set up and run the mill efficiently.

The saw was powered by water which was channelled down an artificial stream – a ‘lade’, from the Duack Burn. The construction of this lade and dam, still visible today, were then a great engineering achievement, as explained here. The Duack burn was the most convenient source of water.

For the lade to supply enough power, it had to begin where the water volume and pressure would be at their highest – just downstream of where the Funalt burn joins the main stream. The lade would have to run downhill in order to supply the water, but the undulating terrain would have reduced the water flow if it was dug in a straight line.

Therefore, the lade was dug very carefully, following the shape of the land in order to maximise the water flow – this explains its twisting course. It was about a mile long, surveyed by eye and dug by hand.

During operation, some of the walls of the lade may have been considerably higher or wider and partly built up with earth. The lade ran into a dam, which was made of clay. A sluice in the dam was shut overnight in order to build up a head of water to provide power the following day.

The ground around the site of the mill is very soft and spongy – there is a 4ft deep layer of sawdust and bark here, now covered by grass. This area was called ‘The Sawdust’. This mill supplied the timber for Forest Lodge.

The Lade and Dam (located in Abernethy Dell Woods National Nature Reserve) have been reinstated as part of a project run by Explore Abernethy.

Horse hames – used to harness the horse for pulling timber

After the sawmill had stopped operating, the Newfoundland (‘Newfie’) foresters working locally during World War 2 expressed an interest in it, but this was not followed up. The harvested timber was instead either shipped out by train or went to the local Canadian timber mill. 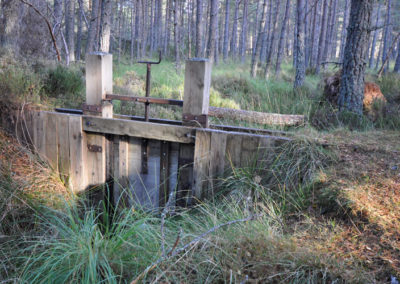 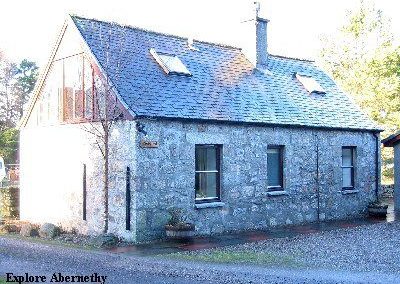 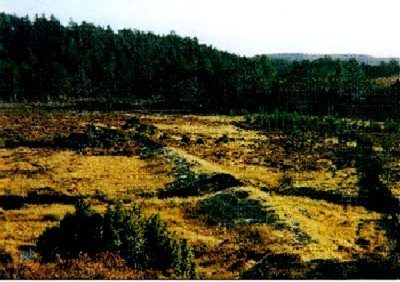 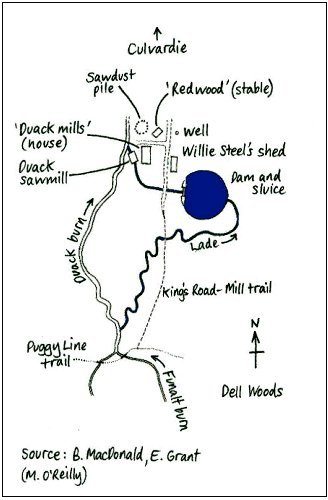 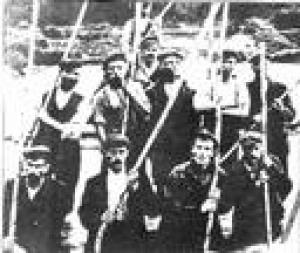