Shooting Lodge and residence for shooting parties. Reserve headquarters for the Royal Society for the Protection of Birds (RSPB)

1883, Category B listed building The system is administered by Historic Scotland on behalf of the Secretary of State in accordance with the Planning (Listed Buildings and Conservation Areas) (Scotland) Act 1997. Cat B constitutes a building of regional, or more than local importance. Also, major examples of some particular period, style or building type which may have been altered.

This means that permission must be sought for any alterations carried out to the interior or exterior. In the late 19th century, regulations were created prohibiting timber cladding and many timber buildings in towns were demolished, with many demolition contracts being awarded.

This is the largest all timber dwelling house in Scotland – consisting of a timber frame and cladding. However, many of these timber shooting lodges have now been lost through fire. The building was originally insulated with sawdust. It contained dining room, sitting room, kitchen and bedrooms for the tenants and guests. Deer were stored in the larder. The original exterior was painted black and white, later repainted to brown

In the preceding few years, Abernethy forest had become more favourable for recreation than timber.

This was due to the nature of the remaining trees, cheaper imports and increased numbers of rail and road visitors (Dunlop 1994). 1878 – Lord Stamford and Warrington rented Abernethy forest.

They had one dwelling at Glenmore and also used Cromault Lodge (located alongside the Crom Allt burn, east of and parallel to the upper River Nethy ). This was apparently more a type of bothy, for 2 or three nights occupation by a shooting party.

Lord Stamford built roads that linked his other sporting estates – Glenmore Forest and Dorback (explaining why some present roads cross several estate boundaries) and they would travel between their estates through Ryvoan Pass and along the Thieves Road (Naylor 1994). 1883 – Forest Lodge was built.

The Stamfords originally named it ‘Lynmagilbert’ after a croft located nearby, alongside the River Nethy. Lady Stamford believed that it would be a more healthy permanent dwelling for her husband, who had fallen ill. Unfortunately, he died shortly after completion of the new lodge (MacLean 2002). The Holt Family 1910 Forest Lodge was then occupied by the new forest tenant, Mr. Richard Holt (grandfather of Christopher Naylor).

From Liverpool, the Holt family were wealthy cotton ‘brokers and owners of the successful Blue Funnel shipping line’ (Eaglesham 1999, MacLean 2002, Forsyth 1900). It was Mr. Holt’s father who was in fact the first sporting tenant of Abernethy Forest, between 1868-76.

But during this time (ie: before Forest Lodge was built), he lived at Dell Lodge in Nethy Bridge. Naylor family One of the Holt daughters married into the Naylor family, who became the last shooting tenants. They vacated the Lodge during World War Two (see below). Mr. C. Naylor still maintains a connection with the village and currently owns Rynettin (1 mile to the southwest of Forest Lodge).

The Linge Company (Kompani Linge) Norwegian nationals who escaped the Nazis during the war trained as commandos in Britain. After this ‘resistance training’ they returned to Norway to carry out sabotage attacks (Lofoten War Museum). A number of commandos trained in Abernethy and Glenmore – probably because the forested, hilly terrain and harsh winters were similar to those in Norway, where they would be operating. Forest Lodge was used as a base – the Naylors having moved out between 1941 – 45.

Perhaps for the sake of secrecy, the Linge Compay had little contact with locals – even having their own telephone wire between Glenmore and Abernethy (Naylor 1994). During their training they are said to have built an assualt course along the river Nethy and used Inchtomach and Cromault Lodge for target and bombing practise.

The Norwegian King at the time – King Hakon, visited them during the War and a military display was put on for him by the commandos at Inchtomach. They reputedly burned five tons of fuel a week whilst staying at the Lodge. The ‘Norwegian Stone’ stands as a memorial to them in Glenmore (Outside the Forestry Commission visitor centre).

There is a museum dedicated to Linge Company at Lofoten, Norway. Members of the company apparently practised blowing up railway tracks, placed along the sandy beach at Loch Morlich, Glenmore.

The Royal Society for the Protection of Birds (RSPB) The RSPB purchased Abernethy Forest from the Naylor family in the 1980s, and Forest Lodge became the headquarters for the RSPB Abernethy Forest Nature Reserve.

Members of reserve staff now live and work there, including seasonal workers and visiting researchers. Permanent staff also live nearby and outbuildings are used for various all terrain and harvesting vehicles. 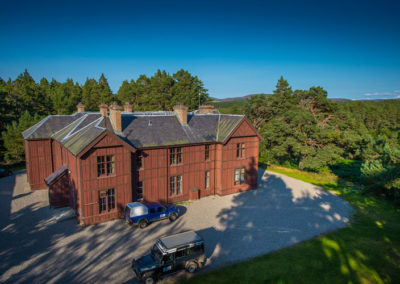 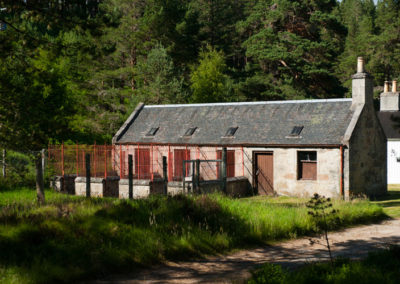