Mr Fergus Robertson ran a ground floor shop there just before WW2.  Granite Cottage was taken over by the Co Op.  with a butchers department, a grocery department and a drapery department.

‘They had to make up sugar and butter… butter came in great big blocks and it was cut – there was rationing in wartime of course – and it was cut up into so many little bits depending on how many were in the family. Sugar was the same – it came in bags and had to be put into brown paper bags. And cheese was the same – it was all cut up into different bits, meat would have been the same because it was rationed as well.

We weren’t badly off here really, but it was rationed and had to be cut up into pieces, of course.’ ‘And you didn’t get plastic bags in those days – there wasn’t such a thing – you went along with your message bags, that was what you used. Sometimes you had to keep your sugar bag and take it back to be refilled because there was a scarcity of paper and that sort of thing – it was quite, quite different from what it is now.

Then of course, there was coupons for clothing and that, so you had to be very careful what you bought, depending on how many coupons – I can’t remember how many coupons we got but, not that many, so you couldn’t buy a lot – mind you nobody could afford to buy a lot anyway so it didn’t make much difference. We had sweetie coupons as well -not much sweeties to buy either, and not a lot of fruit because, well, the fruit all came from abroad and there was no boats or anything – all the boats were occupied so we did’t have a lot of fruit in these days – you were lucky if you got a banana sometimes, you know.’ (Mrs. B. Calder, resident)

‘My father was a manager of the SCWS (co-op), Alistair Morrice I attended Abernethy Primary School and have a Coronation photo (see School section) taken at the school in 1953. This was my first school and my first memories are of Nethy Bridge and living above the co-op.’ (Sheila Lunn nee Morrice 12 July 2011).

The Co Op run shop at Granite Cottage closed during the early 1960’s. 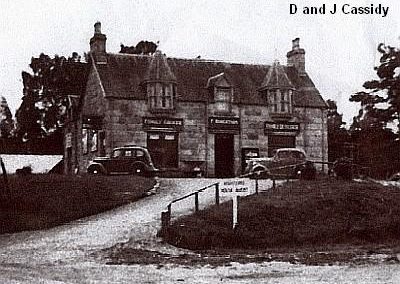