Iron was in production between 1730 and 1735, with a smelting furnace at Balnagowan and a forging mill near the Causer, under charge of Benjamin Lund.

The works included four furnaces for making bar iron. Castings of about 40 cwt were thought to have been produced.

A member of Parliament, a Mr William Stephens, was later selected as the manager of the operation, such was it’s scale.

Several iron products were described at various times, including – Cast Iron pillars ( 9ft x 16ft? ), stamped with the letter ‘I’ or ‘Benj. Lund’. Heaps of cast ‘pig’ iron, for exportation.

A large pile of abandoned iron bars was apparently present at Rothiemoon farm in 1770 ( although described as very brittle and salvaged locally ).

Typically for the YBC, the whole operation was advanced and expensive. Various gangways, sluices, platforms and reservoirs associated with the mills were described.

A ‘bloomery’ was also thought to have been in operation, whereby a waterwheel on the River Nethy worked a powerful bellows which blew air into the furnace. This raised the temperature considerably, which would have helped melt the iron – a ‘blast’ furnace.

A waterwheel was also thought to power the iron hammers which crushed the ore before smelting.

Timbers making up the old foundations of the Iron Mill are visible in the River Nethy when the water is very low (lying against the bank, left side of picture). Immersion in water and low temperature have helped preserve the timber (photograph courtesy of Alastair McCook).

Coulnakyle, between Broomhill and Nethy Bridge on the River Nethy ( grid ref NH 998 215 approx ) (Nicholson and Anderson in Grant 1994)

The York Building Company finding this part of Sir James Grant’s estate a most eligible situation for carrying on other articles of trade and commerce, they erected a furnace for casting iron and several forges for making it fit for the uses of the country and for exportation. They made into charcoal immense quantities of wood, which was used in these furnaces and forges… (A case in the court of session 1784)

It was carried to Nethy Bridge in panniers on ponies (garrons). 120 ponies and many men were involved.

The Great Flood of 1829 cut a channel through Nethy Bridge, which revealed and redistributed some remains of the old iron mill workings. Also exposed was a bed of charcoal 18 inches thick, presumably laid down during smelting.

As late as 1883, two abandoned iron mill wheel shafts were described. They were part buried and apparently unfinished, measuring 18 ft long and 8 inches thick. It was thought that these would have been cast in open sand.

Some remaining cast iron artefacts are apparently located at Kinveachy Lodge. However, no clear evidence of the workings remains in Nethy Bridge.

In 1734 and 1735 the Laird’s Factor, John Grant of Burnside, attempted to reclaim some of the money by seizing 20 sawmills, a smith’s bellows and anvil and some pig iron, but was unsuccessful in obtaining the money.

Following the subsequent collapse of the YBC work in Nethy Bridge, much of the iron produced was rapidly ‘plundered’, or salvaged, by locals.

Accounts mention raids on abandoned houses and removal and barter of massive iron bars and supports, as well as timber, from the mills. One abandoned hammer head was used as an anchor for rafts on the Spey.

Following recommendations from the famous entrepreneur and poet, Aaron Hill, the York Buildings Company (YBC) secured a contract for harvesting Scots Pine in Abernethy and processing it at Nethy Bridge for the Royal Navy.

However, it turned out that the quality was not what had been expected by the Navy and the YBC eventually fell into debt to the Laird Sir James Grant of Grant. 4000 pounds of 7000 pounds had been paid and in 1732, the Laird arrested the YBC governor, Colonel Horsey.

This achieved the payment of the an outstanding 1000 pound instalment, but the final 2000 pound was unlikely to be received. At this point, the Colonel and Laird agreed to another contract to supply wood for charcoal. This was to be exported to England and Holland, but also used for an ironmaking industry, to be set up in Nethy Bridge 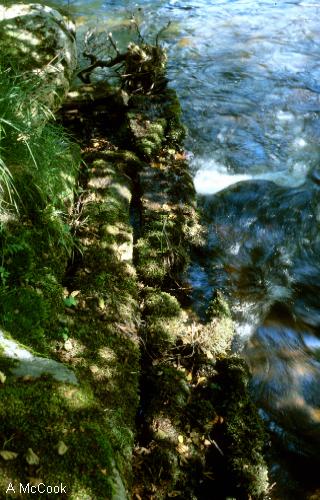