Built after the coming of the railways 1860s.

The current building was originally built in 1897 and completed in 1898 (see the plague above the front door outside, under the canopy). Mrs Fotheringham was the original owner of the site, she demolished the inn, then built the building that exists now, it was her second venture in Hotel Keeping, her first being in Inverness. She must have been quite formidable, being a woman, at the turn of the century, before women got the vote, to be in business on her own.

The original hotel can easily be seen if you step into the gardens and look at the hotel. It was a well balanced structure with a central part and two flanking wings. The tower block on the left with its connecting building was built in the 1920’s. The lift, that is still original, dates from that time.

Note…. it still complies with all legislation that applies in the 21st century. Within the tower block are various suites, you can identify them from the outside. They consisted of hallway, main bedroom, separate bathroom, siting room and personal servants room.

As mentioned earlier, Mrs Fotheringham purchased the Inn…. this was called Abernethy Inn and was built in the mid 1600’s and a basic drovers inn. They brought the Black cattle from Moray and beyond for sale and slaughter in Edinburgh, or even as far south as London. So many cattle in fact that a contemporary at the time wrote that all he saw entering London was a sea of black. However, there is a charter to the effect that an Inn on this site was granted by the king in AD961….that’s well over 1000 yrs of Inn-Keeping on this very site…roughly where the present hotel dining room is now. An extract from ‘The Nethy Bridge Hotel – A brief history of the site’
1480

Embossed in the bottom right hand corner of the original is the name ‘A. Ledingham’. This was the Grantown based photographer, whose son also learned the art and later became a reconnaissance photographer for the RAF. 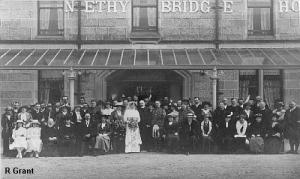