Many of the outdoor activities team returned to stay at the station during the summer of 67 (I think) while they worked on the initial development at Abernethy house when it was first acquired.

The dozen or so instructors simply “camped” in the station with camp beds in the offices. We cooked in the booking office as there already was a cooker etc fitted and we ate etc in the main waiting area. This provided great amusement for the train passengers at meal times looking in in amazement at us through the windows. My lasting memory of staying in the station the second time was how cold it was. I made the mistake of taking my boots off before getting into my sleeping back only to find them frozen the floor the next morning. It took about an hour to get them thawed out again.

I also recall that we spent a lot of time in the kitchen trying to keep warm and getting in the cook’s way. She stayed in a B&B in the village as it was considered too harsh for her to muck in with the rest of us even if it had been PC then!”

Hugh MacPhail was a prominent member of the group and it was he who rented the station from British Rail as it was at that time to make it available for these groups. There were quite a few well connected people in the group who were able to pull strings for deals like this and were happy to do so.

The most famous one is Cliff Richard whom I met when he did at turn at a concert in Glasgow where a group of us were performing. Needless to say we paled into insignificance alongside his performance. It was all great fun then.

Nethy Bridge was in the most western corner of the Great North of Scotland Railway system.  It was built in 1863 and was originally called Abernethy Station. The Station was a simple one with a small goods shed, signal box and level crossing gates. The rail bridge across the Nethy is now gone but the supports can still be seen. Nethy Bridge Station, with a steam train of the Strathspey Steam Railway passing through (photograph courtesy of Alastair McCook).

Our thanks to Alan Gordon for the following story.

“I first stayed there in the summer of 1965 then again in Easter 1967 with a Scripture Union Group known as the Crusaders. These were the older boys some of whom were still at school who helped lead the parties of 12- 15 year olds on expeditions in the hills and sailing on Loch Morlich. We also went skiing in the winter especially at the Easter Break. The rest of the group stayed in field where Barratts now have their time share village We also had a campsite just outside Aviemore for the main group of about 100 kids for the summer camps.

View down Station Road, with Riverside Cottage on the left (photograph courtesy of Alastair McCook). 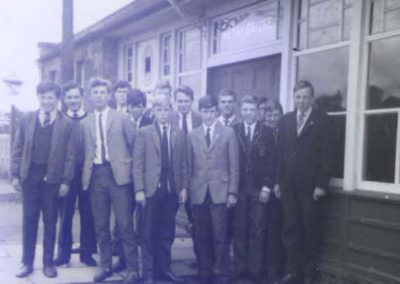 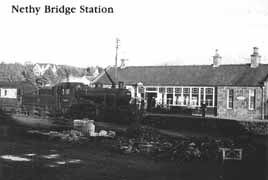