The following were all ministers of the church

James Grant -1686 Transferred to Abernethy 1686 from Urquhart. Minister there for three years. Brought before the Privy Council by the Laird Grant for refusing to accept the new King William or Queen Mary, or pray for them. Apparently had Jacobite sympathies. He was subsequently dismissed and had to leave the manse and glebe and deliver the church keys to the Laird. Died 1693.

No minister for several years.

John Grant -1765 Died 1820. Served 55 years. Also known as Parson John, his portrait appears in Elizabeth Grants ‘Memoirs of a Highland Lady’. He was ‘a little merry man, fond of good eating, very fond of good drinking, no great hand at a sermon… For good practical sense, honesty of purpose, kindness of heart, tender feeling combined with energetic action, Parson John could hardly have been surpassed… He was all the more respected for the strictness of his discipline, yet a sly joke against the minister was much relished by his flock’.

1781 – Refused to admit Patrick McQueen and his wife to Communion on the grounds that Patrick was alleged to have committed perjury at a trial in Inverness. When Patrick challenged this in court, the Parson was upheld because he was judged not to be subject to a civil court in ecclesiastical matters. Patrick then sued him for libel. The case went to the Court of Session where the Lords decided that although it was a purely ecclesiastical matter, the Parson should not have discussed the matter publicly. Subsequently, he was found liable for damages and expenses.

Heritors for the Church of Scotland 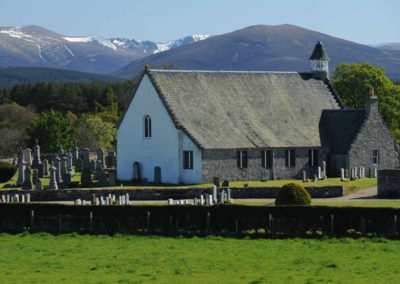