Mr. Jim MacDonald.  His name is written in the cement in the north outside wall. A blacksmith by trade and reputedly a good engineer. The following information is kindly provided by Mr J McDonald, the eldest son of Jim Macdonald and elder brother of John P.Macdonald: ‘My father served his apprentiship with his father, the blacksmith for Lord Lovat at Kiltarlity Beauly but after serving as a Motor Mechanic (SGT) in France during the 1914-1918 War, he had several occupations including partnership in a garage and prior to the 1930’s slump a Locomotive Maintenance Engineer.

When he once again became a blacksmith in Nethy Bridge, where incidentally his mother was born at The Ellon in The Braes of Abernethy.  He had an old pre-war Sunbeam motor car which belonged to MacAulay Lettoch but had over wintered without anti-freeze, if such a thing existed then! The result was a split cylinder block. My father showed me ways of repairing the block which we did successfully. That particular engine did not have a fan but depended on passage through the air to keep it cool. As a stationary engine it was just a play-thing for me and was never used to drive any machinery’.

Located on The Causer

One of the services he provided to the village was charging the wet batteries for home wirelesses. He was also an agent for the farm equipment supplier, ‘Ferris’, based in Inverness.

Mr. John MacDonald (died 1968) The last blacksmith in Nethy Bridge, son of Jim MacDonald, the previous owner. He introduced electric welding and produced a variety of wrought iron goods. He set up his welding shop in the west end of the building.

The Old Smithy in 2005 Mr. Brian Patrick.  Mr Patrick bought the building and surrounding plot from Revack (Seafield) estate in 1971 for GBP 1100. On receipt of planning permission two years later, two bungalows were built on the land and the Forge itself was used as a store. By 1976, the Forge had been renovated to receive holiday guests.

The Old Smithy in 1971. Stone tyring plates visible in the garden Agricultural Work The smithy and blacksmith would have been vital to a small rural community such as Nethy Bridge. Work would have included maintaining farm and forestry tools and shoeing horses. As the Industrial Revolution progressed, horses were superseded by machinery – thus shoeing work gave way to engineering and welding work. Horse shoeing, however, was required during World War 2, during which (Newfoundland) foresters working for the war effort regularly brought their horses to the Forge. The horses would have been used for dragging timber during harvesting. There is a trace of a ford in the river below the Smithy, which may well have been used by horses throughout the 19th Century.

Supporting base of Jim MacDonalds car engine forms the present garden table.  Planning permission required sensitive development of the site and considerable effort was made to preserve the original identity of the main Forge building during its renovation. 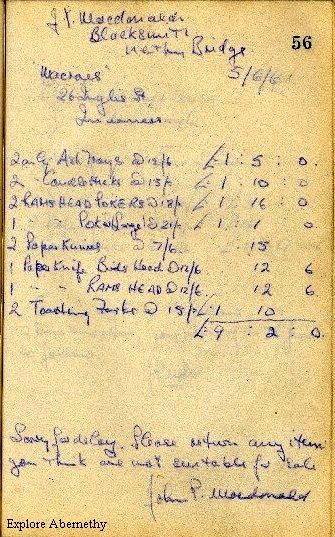