Mr. McAndrew Tailor. Lived at the Causer. His wife ran a small sweet shop there. After Boots bought his previous shop, Mr. McAndrew moved his tailoring there. Mr. McAndrew was disabled and got around using a wheelchair or a tricycle. Due to his disability, the tricycle was propelled by hand cranks instead of foot pedals. He apparently regularly went up and down Balnagowan Brae on it!

Mrs Cluny Married, came to live in the village. Opened shop selling wide variety of things, including drapery and sweets.

Mr. Teneroni French Algerian. Used to be a chef in the Nethy Bridge Hotel and retired to the house. His wife was disabled. He painted china plates etc and opened a shop there selling china. He is remembered for being very generous and good to the village, especially the Football Club. Remained there until he died.

Mr. P and Mrs S Moseley.  During their ownership, holiday accomodation was provided there (to 2003).

Tigh na Drochaid – the white house visible on the right of the picture (post war). This is a view down the road from the Nethy bridge towards the Nethy Bridge Hotel, with Nethy House and Station Road on the left and Balnagowan Brae on the right, between the Hotel and Tigh na Drochaid Photograph courtesy of Alastair McCook 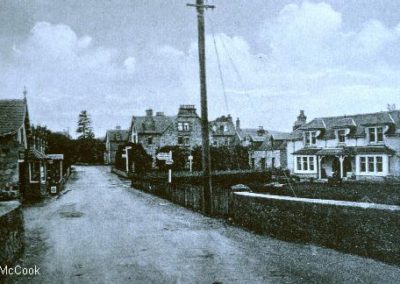