Owners of Tigh na Fraoch were:

David and Margaret Pert who let the cottage at the rear as self-catering holiday accommodation. In 2004 they demolished the cottage and built a new house on the site – Aberniddrie

Jennifer and David Carrott who bought the property in August 2004 and who opened Tigh na Froach B&B in February 2005 , Reverted to private residence in 2015

As a residence for a local builder. An extension to the original Edwardian Villa was built in the late 1900s and run as Pollyanna’s Tea Room. The modern extension has been used as a shop trading as ‘Oriental Crafts’ and later ‘Scottish Crafts’. Shop closed and converted to self-catering accommodation in 1999. The cottage at the rear of the site was used for self-catering accommodation, then demolished in 2004 and a new house built on the site (Aberniddrie). Tigh na Fraoch B&B opened in February 2005.

Built by a local builder for his own occupation.

Centre of village, opposite Games Field

Details below and photograph above kindly provided by Helen George (nee Christie) [18th January 2007]. ‘This house used to be called ‘Garlogie’ and was owned by my grandfather, James Christie, who bought it soon after World War II. He died in 1960 and his two daughters, Daisy and May, lived there until the mid 1960’s. The railway line ran past the end of the back garden.’

Traditional stone Edwardian Villa under a slate roof, with later modern extensions to side and rear. 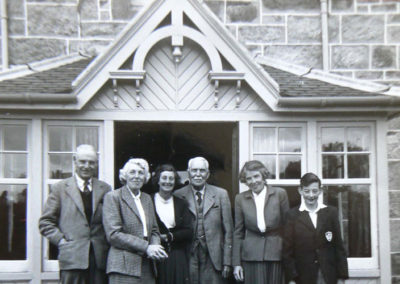