There is a grave of at least one member of the CFC, in the Old Kirk graveyard. Many of the early camps were built by soldiers of the Canadian Army Forestry Corps. Apparently their camps were highly mechanised and advanced – making use of caterpillar tracked vehicles, previously unseen by locals.

However, with the coming of D Day, many of the Canadian Army soldiers were sent to fight, leaving Newfoundland ‘Newfie’ soldiers (who were enlisted with the Navy) to do much of the forestry work. A recording of P Bruce, a Newfie forester based here, exists in the Explore Abernethy centre.

The Canadian soldiers are remembered by many as being very friendly, some being billeted with locals in the village before their camps became operational. The soldiers were often hugely admired by the locals and, as many local men were away at war, they made up the majority of men in the community.

Some Canadian soldiers were of German extraction, their families having emigrated to Canada after World war 1 and having surnames such as ‘Risebrouw’. One Mr. Heidelbaur is remembered as an excellent sprinter in the Nethy Bridge camp.

The soldiers played softball matches against soldiers from other camps (softball featuring an underarm throw, whereas baseball has an overarm throw). Horseshoe games were also played outside – involving the throwing of horseshoes to connect with a stick planted in the ground.

Soldiers collected their pay from the office and also collected handfuls of (rough) toilet paper on their way to the toilet. J Archibald remembers one soldier accidentally using his money notes instead of toilet paper and having to retrieve it !

Films were shown twice weekly at the camp – remembered titles include ‘ The Three Stooges’, ‘Abbot and Costello’ and ‘Keys to the Kingdom’. This final film was Gregory Peck’s first starring role and was seen here before its premiere in London’s West End.

Films were also shown in the village at the Nethy Bridge Institute (now the Nethy Bridge Community Centre), the projectionist being Coe Stewart, who is said to have been concerned over losing business to the Canadian’s ‘cimema’.

Nethy Bridge Canadian camp Consisted of two rows of buildings alongside the road leading from the Causer crossroads to Craigmore. The buildings comprised offices, dormitories, officer’s mess, water tower, canteen and vehicle and maintenance workshops. A concrete structure existing today in School Woods may be the remains of the water tower or the shower block.

1939 – early 1940’s. Many other forestry camps were built during the War in forested districts throughout the Scottish Highlands.

The camps were made of simple timber buildings located in forest districts. Early buildings were erected promptly in the forest, near to harvesting areas, using the rural construction methods used in the home country (eg: Canada or Newfoundland).

Often this took the form of a log cabin, with moss draught proofing. Several men would sleep on bunkbeds in the same room, heated by a fire and lit by oil lamps. The Newfies’ called their beds ‘biscuits’ – these being mattresses formed from compressed straw and covered with blankets.

However, the Scottish winters, although not as cold, were much wetter than the ‘Newfies’ were used to. This, combined with long hours of hard work outdoors, communal living and limited food and heating led to an increasing number of deaths from pneumonia. Thus, these simple cabins were soon replaced by more permanent and comfortable structures with showers, running water and electricity.

Sawdust pile deep in School Woods, Nethy Bridge (2005) This is sawdust originally dumped about sixty years ago as a waste product from the Canadian timber camp

A long timber building, located near Craigmore. Harvested timber was rinsed in a shallow pool nearby (thought to have been in the vicinity of Badanfhuarain, beyond the Causer crossroads). The timber was then raised up into the mill on a moving belt for sawing. Puggy trains then carried loads of sawdust out of the mill along a light railway track into School Woods, creating a large pile of dumped sawdust, which still remains today (2005).

Hall, Stage, Reading Room, Billiard Room Dances were held occasionally and performances were given by women from the Land Army. Bottles of Pepsi were sold for 3 pence, which could be reclaimed if the bottle was returned. Bottles left by the troops under their seats during a performance were often collected by local children, who then claimed the money back themselves.

*I have been researching Finnish sailors who were felling timber during WW1 and was very interested in the details on your web site. It was good to see that someone had remembered them, though your entry says Finnish Soldiers.

They were civilian merchant seamen who had been torpedoed by the German U-boat campaign and who found themselves stuck in port with no way to get passage home. The same U-boat campaign was causing a shortage of timber and it was here in Liverpool that the two facts were put together and the seamen set to work all through Britain.

At Nethy Bridge they were working with the Canadian Forestry Corps and previously worked at Aviemore where the Finns had run the railway taking the sawn timber to the main-line station from the Loch Morlich area. 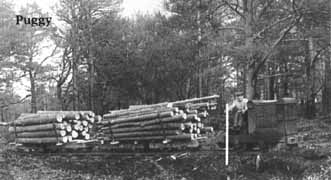 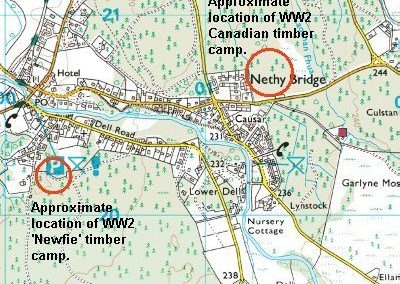 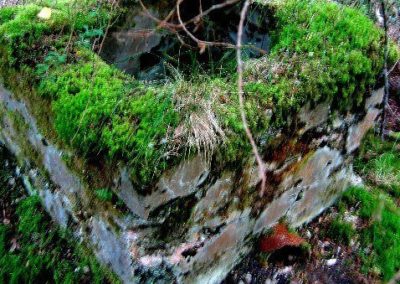 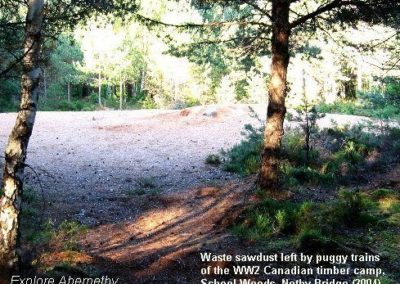 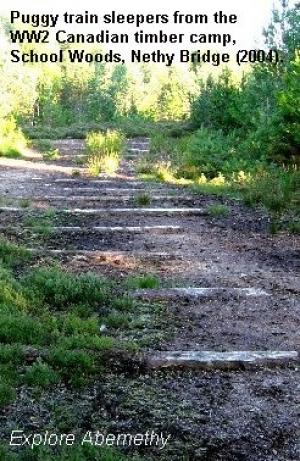